Lily of the Valley is a great update of the free visual novel released by ebi-hime in 2014. In addition to some stunning new artwork and a great soundtrack the story is still as unique as it is captivating. Don’t let the visuals fool you, this novel is not as lighthearted as it first appears and thanks to some great writing the story is a lot more memorable than expected. The game is short enough to complete in a single sitting, but still manages to have a bigger emotional impact than stories that are ten times longer.

Gameplay: Pretty much a kinetic novel with only a single choice, but the story is so good that it is hard to stop playing.

Graphics: The updated artwork looks really nice, but the option to play with the older visuals is a nice touch.

Sound: The hauntingly beautiful soundtrack is definitely a highlight

A small town in Wales is probably the last place we would expect to be the setting for a visual novel, but then along came Lily of The Valley. What’s more, the protagonist is a 34 year old man with the soul crushing career of being employed in the call center at an insurance company. The game opens with our protagonist attending the funeral of his mother, who died by choking on a bran muffin of all things. What follows is thirteen short chapters of the protagonist reflecting on his life and the choices that brought him to where he is. Since there isn’t much to do at the family home apart from talking to his father and teenage sister, our protagonist goes out to roam the countryside during his stay. It is here where he meets a fascinating young girl who not resembles his childhood sweetheart, but also appears to have had some connection to his mother.

Lily of The Valley was actually originally released in 2014, but has now been revamped with brand new art as well as an updated script and a new soundtrack. The new art created by Sillyselly, who also the art for other ebi-hime titles like Empty Horizons, Strawberry Vinegar and Asphyxia, is absolutely gorgeous. Fans of the original art, which is a little bit more anime inspired, need not worry either as the option exists to toggle between the two styles on the fly. However, the game does feature a couple of new CGs which are displayed even when using the old sprites. The majority of the novel also still consists of text as only the protagonist’s sister, Hazel, and Lily, the girl he meets on his walk, have sprites. While the game still doesn’t have any speech, it does boast a brand new soundtrack with some great tunes. We are suckers for good piano music and enjoyed every one of the 8 tracks featured in this visual novel. The composer is actually yuzuki, who also contributed to Strawberry Vinegar and Windswept Night, so fans should know what to expect. We definitely recommend also getting the original soundtrack as it is available as a separate purchase .

At only about 25k words Lily of The Valley isn’t a very long novel, but it does feature some great writing. The main story is viewed from the perspective of the protagonist, who has a pretty bleak outlook on life. His thoughts wander everywhere from the ex girlfriend who broke up with him over the phone to family picnics in his youth that got spoiled by rain. While this might not sound particularly captivating, ebi-hime definitely has a way with words and her writing effortlessly drew us into the story. Contrary to the light and beautiful visuals, the game actually deals with some very dark themes. Glancing at the screenshots might make it seem like this is just another romantic slice of life story, but nothing could be further from the truth. Since the game is very short, we don’t want to spoil anything and recommend that players go into this title knowing as little as possible about the story.

Lily of the Valley is short enough to complete in one sitting and since the story is so good this is probably what most players will end up doing. There is only a single choice to make in the game, which leads to one of two slightly different endings. Viewing both endings unlocks a short epilogue, but there is also an intermission and some notes to discover, which shouldn’t be missed. In addition, the game features a handful of Steam achievements to earn and seven Steam Cards that can be used to craft Lily of the Valley themed emoticons and backgrounds.

Although the original release of this visual novel was free, there is no question that the extra work done on this revamped version justifies the small price tag. Players who are only interested in visual novels with fan service and goof-ball characters will probably find Lily of The Valley a little somber for their tastes, but anyone who can appreciate great dialog and relatable characters should definitely give it a go. It is one of those visual novels that you’ll find yourself contemplating long after the credits have rolled, which is not something that happens very often. 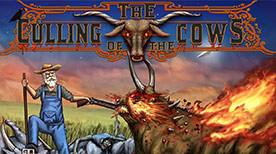